When it published my story on Atlantic City this week, The Atlantic Cities may have confused Google (according to one editor). The city’s newest casino, the Revel Resort is having its premiere this weekend and that presents an excellent opportunity to take a look at Atlantic City’s, um, interesting relationship with casino-based redevelopment.

A couple blocks off the boardwalk, Atlantic City is a different place. photo by Kelly Bennett

Tourists usually pick a place to visit that’s the best at something. New York and Chicago have their skyscrapers. Orlando has its amusement parks. Detroit has decay. My wife and I stayed there a few days last summer and, honestly it was just sad. Detroit was built for 2 million people but only 700,000 people live there now. It’s a city of 1.3 million missing people. Detroit has this endless supply of buildings–wonderful buildings–that nobody uses. That’s what really gets to me about this city. All the lost potential, wasted effort, abandoned beauty. The world’s biggest ghost town.

I just saw  Detropia, a film that explains the problems of Detroit through a collage of lives, no narrator. It doesn’t get overly nostalgic and it’s not a movie of “ruin porn,” although you can’t tell Detroit’s story without ruins. Detroit’s strategy is to invest in its best places and try to build outward again. Some young people are moving downtown and that’s probably the best way for the city to start over. The problem is, the city can’t really afford to invest in itself anymore. It’s spread out over 140 square miles and it just can’t support its current population with this massive infrastructure footprint. When there’s block after block with one house where there used to be 20, how can you afford to maintain the streets, water and sewer lines, the police and fire departments, or even to plow the snow?

The thing that builds a city, millions of people making individual decisions, has been the undoing of Detroit. It’s become a repository for the state’s poor, and when they’re lucky enough to find more work, they leave. It’s a logical decision. The city is so far gone, so disappeared, that I’m afraid no matter how much the economy recovers, pretty soon it just won’t be a logical place for anyone to live. 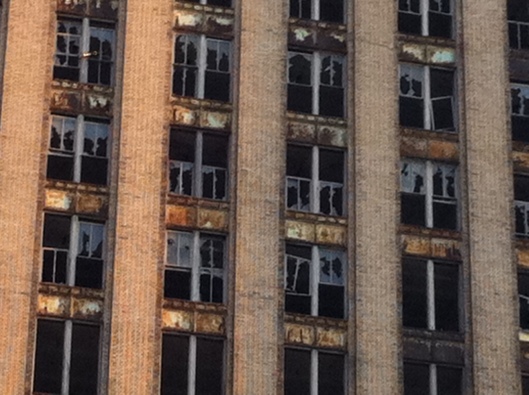 Thursday night, President Obama is giving his big jobs speech. I doubt we’ll get any new programs or policy changes with the current state of Congress, but I want to float the idea of expanding the federal historic preservation tax credit program as a job creator. I outlined in an earlier post how this type of program helps local economies. This is an idea I’ve been working on since 2009, when I tried to get North Carolina’s historic preservation commissions to work on their representatives and senators to consider this strategy. Senator Richard Burr, a Republican who happens to live in my city of Winston-Salem, was the only one that seemed interested, but nothing got off the ground.

Here’s some background on how the program works: As it stands now,  the Historic Rehabilitation Tax Credit gives a 20% federal tax credit for rehabilitation work on income-producing properties within National Register Historic Districts and landmark properties.  While this sounds like a limited group of buildings and neighborhoods, it is actually quite broad — there are more than 13,600 of these districts in the nation.  My state of North Carolina has 400 national register districts which include thousands of individual buildings.

The tax credit program could be changed in several ways that could stimulate the economy. Here’s a start:

1. Easily the most far-reaching change would be to expand the tax credit from exclusively income-producing properties to also include all residential properties. The vast majority of historic buildings are houses and this could encourage investment in older neighborhoods, particularly the rehabilitation of foreclosed properties. This idea is part of H.R. 2555, which is in committee, but here are some more ideas:

3. The floor for the minimum spent on a project could be lowered. Right now, a person must spend at least $25,000 on a rehabilitation project in order to qualify for the tax credit. Lowering that amount would encourage some smaller renovations by people that can’t afford a wholesale renovation.

4. There is another element of the program that allows a 10% credit to rehabilitation of “older buildings,” currently defined as those built before 1936. If this definition was changed to allow buildings “fifty years old or older,” a number of properties would be included in the program that would not be otherwise.

It’s almost Labor Day, when the last summer vacationers will be leaving the Catskills. It’s pretty safe to say that most of them left a long time ago, though. The area known as the Borscht Belt is where countless middle-class Jewish families streamed up from New York City and spent their summers in the countless hotels and bungalow colonies. It’s where young comedians like Don Rickles, Joan Rivers and Mel Brooks plied their trade. Where nobody puts Baby in a corner. Today, it looks more like the Rust Belt.

I spent about half my childhood here as the son of school teachers but never got to see the area in its heyday. Never got to take advantage of the vast entertainment infrastructure that existed from the ’40s to the ’60s. The interstate highway system and cheap airfare brought everyplace in the country that much closer to New York City, and everyone apparently decided to vacation someplace else. Today, a lot of the old hotels are just sitting empty, waiting to burn down. Or waiting to be turned into a casino.

Ever since I could read I remember seeing a billboard practically begging, “Casinos mean jobs.” Atlantic City had just legalized gambling, trying to bring back their own lost summer crowds and it was another nail in the coffin of the Borscht Belt. They’re still pushing for gambling in the Catskills, and Gov. Andrew Cuomo is considering ending the state’s gambling ban. It’s too late, though.

State governments don’t really want their own residents gambling. It’s always a losing proposition*, so it’s best to get out-of-state suckers to spend their paychecks at the craps table. You want your residents spending their money on the mortgage and sending their kids to college instead. That’s why  casinos are usually located near state borders. The problem for New York State is that it’s surrounded by legalized gambling, so most of the gamblers they get will be New Yorkers. I doubt that will stop legalization, though. The state’s coffers have too many holes right now. And the Catskills will finally get their wish.